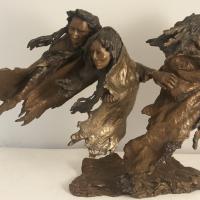 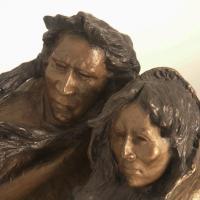 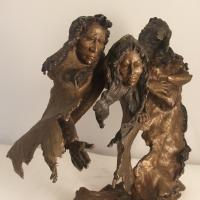 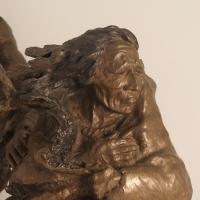 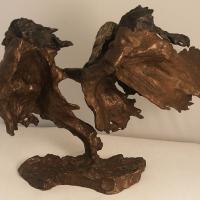 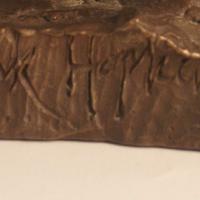 Without a doubt the most exquisite and outstanding bronze sculpture I have ever viewed or had the privilege to offer is this Mark Hopkins "Broken Treaty" Solid Bronze Sculpture #215 of 450.

Note the detail on the faces and the flowing robes.  Mark does great sculpting but I really think he outdid himself on "Broken Treaty".

Certificate of Authenticity signed by Mark Hopkins.  Below is more information on Mark and further down is a link to his website.

Zell Miller, Former Governor of Georgia, PLUS A WHO'S WHO OF CORPORATIONS

In 1988, a promising young artist named Mark Hopkins started a foundry with a unique idea – he wanted to produce inexpensive bronze sculpture, and make it accessible to ordinary people. Today, his foundry is one of the most unusual in the world, enjoying spectacular success, and shipping thousands of Mark Hopkins’ works all over the globe.

With such limited resources, it is possible to understand the artist and gallery rationale behind very limited editions and high prices. However, the fact is that few artists can cast their own bronze and even fewer foundries are equipped to produce fine art bronze in sufficient quantities to satisfy the demand of a vigorous market. Mark Hopkins Sculpture has made it possible.

Mark Hopkins is a master technician of the ancient lost wax process. Through his knowledge and skill, and the contributions of many talented craftsmen, his facility has developed highly efficient proprietary casting techniques, while staying true to the ancient lost wax process. These innovative methods have allowed them to create hot cast bronze for a fraction of the cost most people expect. They have given Mark the freedom to work more creatively, so that beautiful, original bronze sculpture can be enjoyed by many, rather than a privileged few.

Mark Hopkins’ Sculptures are known the world over for their beautifully natural and flowing motion. While his work portrays a spontaneous moment in the life of its subject, it also portrays the deep inner “spirit” of the human or animal being portrayed. He often focuses exclusively of faces and hands, in order to express the very heart of the emotion or experience. And even in the very ordinary moments in the daily life of the subject, Mark manages to convey both nobility and majesty.