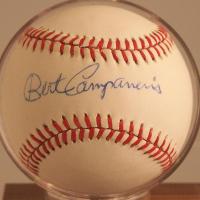 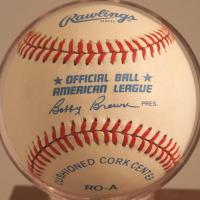 Bert Campaneris Autographed Baseball with acrylic cube display case.  This autographed ball is in excellent condition, however, the seller couldn't locate the COA.  As 31 other balls we purchased from this seller had COA's we can only assume this one was misplaced.  We have compared the signature to other Campaneris signatures and feel strongly that this is a valid signature.  If later it is found not to be a valid signature we will return 150% of the purchase price.

Dagoberto Campaneris Blanco (born March 9, 1942 in Pueblo Nuevo, Cuba), generally known as Bert Campaneris and nicknamed "Campy", is a former shortstop in Major League Baseball who played for four American League teams, primarily the Kansas City and Oakland Athletics. One of the mainstays of the Athletics' championship teams of 1971 to 1975, he holds the A's franchise records for career games played (1795), hits (1882) and at bats (7180). After leading the AL in stolen bases six times from 1965 to 1972, he retired with the seventh most steals in history (649); he also held the Athletics' career record from 1972 to 1990. He led the league in putouts three times, and ended his career among the major league leaders in games (5th, 2097) and double plays (7th, 1186) at his position. He hold the record for most errors since 1940, with 388. His cousin José Cardenal was a major league outfielder for 18 seasons.

A small, skinny player at 5 ft 10 in (1.78 m) and 160 pounds (73 kg), the Cuban-born Campaneris was a key figure on the A's of the 1960s and 1970s, adding his fiery temper, competitive spirit and superb play to the team; he was also a daredevil on the basepaths. In his debut with Kansas City on July 23, 1964, Campaneris belted two home runs, the first coming on the first pitch thrown to him by Jim Kaat. He is one of three players in major league history to hit two homers in his first game; Bob Nieman (1951) and Mark Quinn (1999) are the only others to accomplish this feat.

On September 8, 1965, as part of a special promotion featuring the popular young player, Campaneris became the first player to play every position in a major league game.  On the mound, he pitched ambidextrously, throwing lefty to left-handers, and switched against right-handers. Since then, César Tovar (Twins, 1968), Scott Sheldon (Rangers, 2000) and Shane Halter (Tigers, 2000) have joined this select list of nine-position players in a major league game. Also in 1965, Campaneris led Kansas City in batting average (.270), and led the league in triples (12) and stolen bases (51), the latter mark being the highest total by an Athletic since Eddie Collins stole 58 in 1914. In 1966 he finished 10th in the voting for the AL's Most Valuable Player award after having a similar season at the plate, but playing more regularly at shortstop.