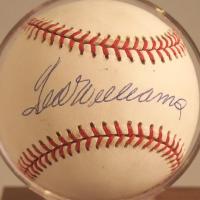 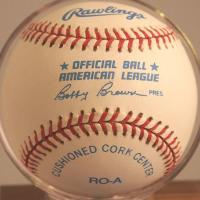 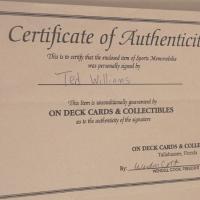 This ball is in excellent condition and comes with a Rawlings box and name plate with Ted Williams engraved on it.

Theodore Samuel "Ted" Williams (August 30, 1918–July 5, 2002) was a left fielder in Major League Baseball. He played 21 seasons with the Boston Red Sox, twice interrupted by military service as a Marine Corps pilot. Nicknamed The Kid, the Splendid Splinter, Teddy Ballgame, and The Thumper, he is widely considered one of the greatest hitters ever.

Williams was a two-time American League Most Valuable Player (MVP) winner, led the league in batting six times, and won the Triple Crown twice. He had a career batting average of .344, with 521 home runs, and was inducted into the Baseball Hall of Fame in 1966. He is the last player in Major League Baseball to bat over .400 in a single season (.406 in 1941). Williams holds the highest career batting average of anyone with 500 or more home runs. His career year was 1941, when he hit .406 with 37 HR, 120 RBI, and 135 runs scored. His .551 on base percentage set a record that stood for 61 years.

Williams moved up to the major league Red Sox in 1939, immediately making an impact by leading the American League in RBI and finishing 4th in MVP balloting. Williams quickly became known as one of the most potent left-handed hitters in MLB. A myth that developed was that his eyes were the best in history, being able to read the words on a record album while it was spinning.

In his book, Williams acknowledges that "There was some great batting done that year [1941]" and mentions Joe DiMaggio and Cecil Travis, who hit .359. He continued, "I think, surely, to hit .400 you have to be an outstanding hitter having everything go just right, and in my case the hitter was a guy who lived to hit, who worked at it so hard he matured at the bat at a time when he was near his peak physically. The peaks met."

Please see our large selecttion of Autographed Baseballs & Photo's by clicking on the link directly below:

CLICK HERE FOR MUCH MORE INFORMATION & STATS ON TED WILLIAMS