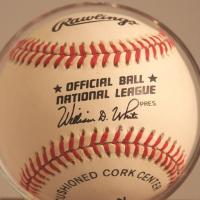 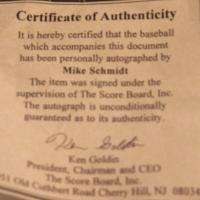 Mike Schmidt Autographed Baseball with COA from Score Board, Inc.  This ball is in excellent condition and comes with a Rawlings Box. Signed in early 1990's.

Michael Jack Schmidt (born September 27, 1949 in Dayton, Ohio) is a former Major League Baseball third baseman who played his entire  career for the Philadelphia Phillies.  Schmidt is considered among the greatest third basemen in the history of major league baseball.  Schmidt was voted National League MVP three times, an All-Star 12 times, and received more votes than any other third baseman in 1999's Major League Baseball All-Century Team. In 1995, he was inducted into the Baseball Hall of Fame.

The Phillies drafted Schmidt in the second round of the 1971 Major League Baseball Draft with the 30th overall pick. He was signed by scout Tony Lucadello, who had followed him since Little League. He was assigned to the Phillies' farm system where he rapidly progressed, joining the Phillies in 1972. In 1973, his first full season, Schmidt batted only .196 with 136 strikeouts. He did, however, demonstrate his power potential with 18 home runs.

Schmidt had a breakout season in 1974, when he led the National League in home runs and demonstrated his prowess in the field. Over the rest of the 1970s, he excelled with bat and glove, winning two more home run titles and a succession of Gold Gloves. He helped the Phillies win three straight division titles from 1976 to 1978, the team's first post-season appearances since 1950.

Schmidt had a powerful arm and was especially adept at fielding short grounders barehanded. His 404 assists in 1974 remain a record for third basemen. He also filled in at shortstop and first base.

On June 10, 1974, Schmidt hit a pitch into a public address speaker suspended 117 feet above and 329 feet away from home plate in the Astrodome in Houston, Texas. The ball then fell to the field, where, by the Astrodome's ground rules, it remained in play. Since he had already started his slow home run trot, he was held to a single. Runners on first and second when the ball was hit each advanced only one base. Many experts agree the ball would have carried beyond 500 feet.

In 1976, Schmidt hit 12 home runs in Philadelphia's first 15 games, including four in one game on April 17[1], a feat accomplished only 15 times in the history of baseball. Schmidt won his first of 10 Gold Gloves that year and carried the Phillies to the 1976 NLCS, where he hit .308.

1977 was a key season in Schmidt's career. Up until then, despite his recognition in the National League as both a slugger and dynamic defensive third baseman, Schmidt's batting average had been mediocre. Now, however, he improved that average by re-vamping his hitting. Early on, Schmidt had been a dead pull-hitter, taking almost every pitch to left field. Now he adjusted his stance and swing to go with the pitch and hit to all fields. The distance of his home runs declined, but their frequency did not. And Schmidt's overall hitting became much more consistent. In one month, his batting average rose from .243 to .292. Over the next few months, Schmidt very nearly achieved his first .300 season.

In 1980, Schmidt elevated his game, leading the league in home runs with 48 (by a margin of 13 over his nearest competitor), and winning the National League's Most Valuable Player Award in a unanimous vote. He broke his own team home run record, which stood for 26 years until first baseman and 2006 National League MVP Ryan Howard hit 58 home runs in 2006. The Phillies won the World Series for the first time in team history, defeating the Kansas City Royals. Schmidt, who hit two homers and drove in seven runs, was selected as World Series MVP.

In 1981, the Phillies again reached the postseason and Schmidt won his second MVP Award, setting personal highs in batting average, on-base average, and slugging average during the strike-shortened season. In 1983, in celebration of the team's 100th anniversary, Schmidt was voted by fans the greatest player in the history of the franchise. That year, he led the Phillies back to the World Series, but they were defeated by the Baltimore Orioles.

In 1985, Schmidt played primarily first base from late May through the end of the season. In 1986, Schmidt won his third MVP Award, a record for a third baseman. In 1987, Schmidt hit his career 500th home run in the ninth inning of a game in Pittsburgh, providing the winning margin in an 8-6 victory.