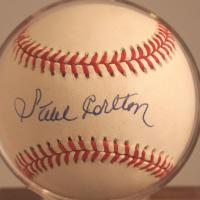 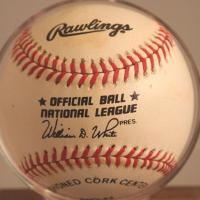 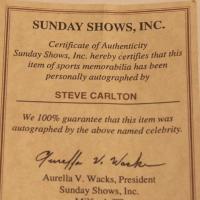 Steve Carlton Autographed Baseball with COA from Sunday Shows, Inc., Milford, CT.  Sunday Shows is a professional show manager in the Milford area. This ball is in excellent condition with a COA and from a hall of famer.  The ball has some slight yellowing on a couple spots on the back but this not visible from the front sweet spot where the autograph is located and, therefore,  this ball is reduced from $60 to $35.  Ball comes with a Rawlings box.

Steven Norman Carlton (born December 22, 1944) is a former left-handed pitcher in Major League Baseball, from 1965 to 1988. He was elected to the Baseball Hall of Fame in 1994. He was affectionately known to Philadelphia fans as "Lefty". He played the most number of years for the Philadelphia Phillies, receiving his greatest acclaim as a professional and winning four Cy Young Awards. In addition, Carlton spent time with the St. Louis Cardinals, Chicago White Sox, San Francisco Giants, Cleveland Indians and Minnesota Twins.

Carlton has the second-most lifetime strikeouts of any left-handed pitcher (4th overall), and the second-most lifetime wins of any left-handed pitcher (11th overall). He was the first pitcher to win four Cy Young Awards in a career. He held the lifetime strikeout record several times between 1982 and 1984, before his contemporary Nolan Ryan passed him. One of his most remarkable records was accounting for nearly half (46%) of his team's wins, when he won 27 games for the last-place (59-97) 1972 Phillies. He is still the last National League pitcher to win 25 or more games in one season,  as well as the last pitcher from any team to throw more than 300 innings in a season.   He also holds the record with the most career balks of any pitcher, with 90 (double the second on the all time list, Bob Welch).

Carlton debuted with the St. Louis Cardinals as a 20-year-old in 1965 and by 1967 was a regular in the Cardinals rotation. An imposing (6'4"/1.93 m) man with a hard fastball and slider, Carlton was soon known as an intimidating and dominant pitcher. Carlton enjoyed immediate success in St. Louis, posting winning records and reaching the World Series in 1967 and 1968. On September 15, 1969, Carlton struck out 19 New York Mets, while losing to the Mets, 4-3, setting the all-time modern-day record at that time for strikeouts in a nine-inning game. That season, he finished with a 17-11 record with a 2.17 ERA, second lowest in the NL, and 210 strikeouts. A contract dispute with the Cardinals made Carlton a no-show at spring training in 1970. He proceeded to go 10-19 with a 3.73 ERA, leading the NL in losses. He rebounded in 1971 by becoming a 20-game winner for the first time, going 20-9 with a 3.56 ERA.

Following a salary dispute, Cardinals owner Gussie Busch ordered Carlton traded. Eventually, he was traded to the Philadelphia Phillies before the 1972 season for pitcher Rick Wise.[5] The trade is now considered one of the most one-sided deals of the 1970s, as well as one of the worst trades in Cardinals history, and, conversely, one of the best trades in Phillies history.

In Carlton's first season with Philadelphia, he led the league in wins (27), complete games (30), strikeouts (310), and ERA (1.97), despite playing for a team whose final record was 59-97. His 1972 performance earned him the Hickok Belt as the top professional athlete of the year. His having won 46% of his team's victories is a record in modern major league history. Carlton attributed his success to his grueling training regime, which included Eastern martial arts techniques, the most famous of which was twisting his fist to the bottom of a 5 gallon bucket of rice.