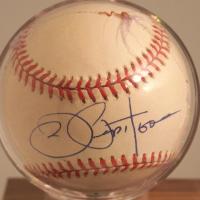 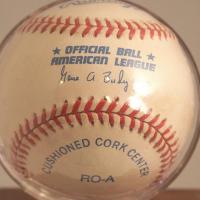 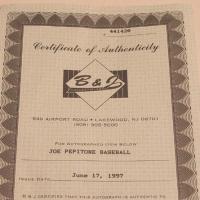 Joe Pepitone Autographed Baseball with COA from B & J Collectibles Lakewood, NJ.  This balls is in excellent condition and professionally shrink wrapped right after signing.  The ball comes in a Rawlings box.

The darkness on the bottom of the baseball on the back side is a shadow.

Yankee management believed he could handle the first base job, and before the 1963 season traded Skowron to the Dodgers. Pepitone responded, hitting .271 with 27 HR and 89 RBI. He went on to win three Gold Gloves, but in the 1963 World Series he made an infamous error. With the score tied 1-1 in the seventh inning of Game Four, he lost a routine Clete Boyer throw in the white shirtsleeves of the Los Angeles crowd, and the batter, Jim Gilliam, went all the way to third base and scored the Series-winning run on a sacrifice fly. He redeemed himself somewhat in the 1964 Series against the Cardinals with a Game 6 grand slam.

The ever-popular Pepitone remained a fixture throughout the decade, even playing center field after bad knees reduced Mickey Mantle's mobility. After the 1969 season he was traded to the Astros for Curt Blefary. Later he played for the Cubs and finished his major-league career with the Braves.

Please see our large selection of Autographed Baseballs and Photo's.