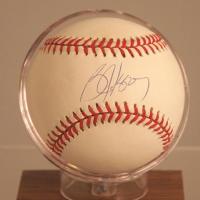 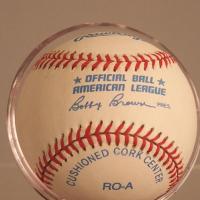 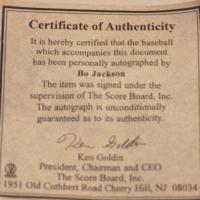 Bo Jackson "Two Sport Star" Autographed Baseball with COA from The Score Board, Inc.   This ball is encased in a plexiglass dome with a walnut base and plague reading  BO JACKSON "TWO SPORT STAR".

The ball is in mint condition.

Vincent Edward "Bo" Jackson (born November 30, 1962) is a retired American baseball and football player. He was the first athlete to be named an All-Star in two major American sports, and he won the Heisman Trophy in 1985.

In football, Jackson played running back for the Los Angeles Raiders of the National Football League. In baseball, he played left field and designated hitter for the Kansas City Royals, the Chicago White Sox, and the California Angels of the American League in Major League Baseball. While at Auburn University, he won the 1985 Heisman Trophy, the prize annually awarded to the most outstanding collegiate football player in the United States. He also ran a 4.12 40 yard dash, still considered the fastest verifiable 40 time at an NFL Combine.  A hip injury severely impaired his professional baseball career, and ended his NFL career.

Jackson was drafted by the Tampa Bay Buccaneers as the first pick of the 1986 NFL Draft, but he opted to play baseball for the Kansas City Royals, the defending World Series champions, instead. He spent most of the season with the Memphis Chicks in the minor leagues before being called up for regular duty in 1987, where he had 22 home runs, 53 RBIs and 10 stolen bases as an outfielder for the Royals.

He began to show his true potential in 1989, when he was voted to start for the American League All-Star team, and was named the game's MVP for his play on both offense and defense. In the top of the first inning, he caught Pedro Guerrero's 2-out line drive to left-center field to save two runs. Then he led off the bottom of the first—his first All-star plate appearance—with a monstrous 448 foot home run off Rick Reuschel of the San Francisco Giants. NBC-TV announcer Vin Scully exclaimed, "Look at that one! Bo Jackson says hello!" Wade Boggs followed with his own home run, making them the first pair in All-Star history to lead off their side's first with back-to-back home runs.  In the 2nd inning, he beat out the throw on a potential double play to drive in the eventual winning run. He then stole 2nd base, making him one of two players in All-Star Game history to hit a home run and steal a base in the same game (the other is Willie Mays). Jackson finished the game with two hits in four at-bats, one run scored and two RBI.

Before Jackson finished his career in California he spent two years playing for the Chicago White Sox. It was with the White Sox that he made his only post-season appearance in the 1993 American League Championship Series, which Chicago lost to the Toronto Blue Jays in six games.

While with the Sox, Jackson promised his mom that once he returned from his hip replacement surgery that he would hit a home run for her. Before he could return, his mother died. In his first at bat after surgery he hit a home run to right field. Jackson had the ball engraved in his mother's tombstone.

Please see our large selection of Autographed Baseballs and photo's by clicking on the link directly below: