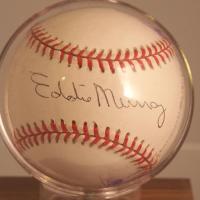 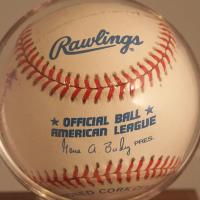 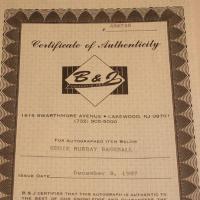 Eddie Murray Autographed Baseball with COA from B & J Collectibles dated December 8, 1997.  This ball is in excellent condition as it is wrapped in shrink wrap, sealed and comes with an acrylic cube display case as well as a Rawlings box.

Eddie Clarence Murray (born February 24, 1956 in Los Angeles, California) is a former Major League Baseball first baseman who was known as one of the most reliable and productive hitters of his era, earning the nickname "Steady Eddie". Murray is regarded as one of the best switch hitters ever to play the game. He was elected to the Baseball Hall of Fame in 2003.

Murray was selected by the Baltimore Orioles in the 3rd round of the 1973 amateur draft and had several successful seasons in the minor leagues. He debuted at the major league level on April 7, 1977 and played in 160 games for the Orioles in his first season. He won the American League Rookie of the Year award by batting .283, hitting 27 home runs and contributing 88 RBI.

Murray did not suffer the sophomore jinx, instead building on his successes. With the Orioles from 1977 until 1988, Murray averaged 28 home runs and 99 RBI and was a perennial candidate for the MVP award, twice finishing second in the voting. His best season was 1983 with the Orioles when he hit .306/.393/.538 with 110 RBI and a career-high 33 home runs; though a spectacular season, he finished second in the MVP voting. The Orioles also appeared in the post-season twice, in 1979 and 1983, and won the World Series in 1983. Murray's close-knit friendship with fellow Oriole Cal Ripken Jr. was highly publicized in Baltimore at the time.  The first baseman electrified home-team fans with his remarkable clutch hitting. Chants of "EDDIE-EDDIE" often reached a deafening crescendo during climactic points in a game. As is true with other extraordinary batters, Murray's likelihood of getting a hit increased when runners were on second or third base and when he had fouled off several pitches during an at-bat..

Murray was traded on December 4, 1988 to the Los Angeles Dodgers for Juan Bell, Brian Holton and Ken Howell and had three successful seasons with the Dodgers, knocking in 88, 95 and 96 runs. In 1990, Murray led the Major Leagues in hitting, but failed to win the National League batting crown.

Prior to the 1992 season, Murray signed a two-year deal with the New York Mets, for whom he played well despite playing for one of the worst teams in the major leagues. In 1993 he again drove in 100 runs, this time for the final time in his career.  From 1994 to 1997, Murray played for several teams, including the Cleveland Indians (1994–96), the Baltimore Orioles (1996–97), the Anaheim Angels (1997) and the Los Angeles Dodgers (1997). Although he no longer possessed the presence at the plate he had had in the 1980s, he was a valued and still consistent contributor for these teams. Murray reached the 3,000-hit plateau as an Indian on June 30, 1995 at the Hubert H. Humphrey Metrodome with a single to right field off Minnesota Twins pitcher Mike Trombley. In the 1995 World Series between the Cleveland Indians and the Atlanta Braves, Eddie won Game 3 with a single in the bottom of the eleventh inning off of Alejandro Pena to score Alvaro Espinoza. The hit made the series 2–1, in favor of Atlanta. On September 6, 1996, he hit his 500th career home run—fittingly, the home run came as a member of the Orioles, and also came exactly one year to the day that Ripken had broken Lou Gehrig's streak of 2,130 consecutive games played. He retired after the 1997 season with 504 home runs, ranking him second among switch-hitters behind Mickey Mantle's 536.

Please see our large selection of Autographed Baseballs and photo's by clicking on the link directly below: