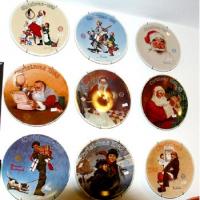 We have eight (left from 14) Norman Rockwell Christmas Collector Plates from 1980 thru 1992. They are porcelain, with hangers, and in excellent condition.

You may order off the shopping cart and please specify in the Information Box which year you wish to order.