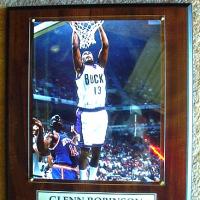 
Notched the first four-point play of his career and the eighth in Bucks history, totaling 37 points, against the Philadelphia 76ers on 1/17/96 Named to the 1996 United States Olympic Basketball team on 7/30/95, but was forced to withdraw on 6/25/96 due to injury Named to the 1994-95 NBA All-Rookie Team after leading all rookies, and the Bucks, in scoring with 21.9 ppg Only two-time winner (December, April) of Schick NBA Rookie of the Month honors in 1994-95 Posted a team-high 21 points, four rebounds and three assists in the Schick Rookie Game during the 1995 NBA All-Star Weekend in Phoenix Recipient of the 1994 John Wooden Award as the nation's top college basketball player.