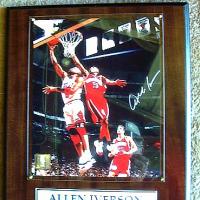 
Thie autographed photo under plexiglas with halograph mounted on a very nice walnut plaque with plate. Named All-NBA second team in 2001-02 and voted as a starter on the Eastern Conference All-Star Team Led league in scoring in 2001-02 with 31.4 ppg as well as steals (2.80 spg) and minutes (43.7).


Named the 1996-97 Schick NBA Rookie of the Year, becoming the first 76er to ever win the award Set the Sixers' all-time rookie record with 1,787 points. Scored 40 points in five straight games in April to set an NBA rookie record Named MVP of the Schick Rookie Game during the 1997 NBA All-Star Weekend, posting 19 points and a game-high 9 assists. Named NBA Rookie of the Month for November, 1997, leading all rookies in scoring (21.8 ppg), assists (6.4 apg) and steals (2.67 spg)