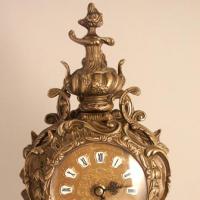 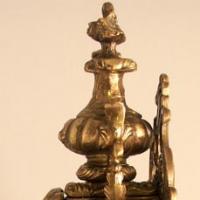 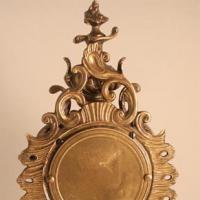 A stunning French Bronze Rococo Mantle Clock with a great deal of detail with bronze that is in excellent condition.  Clock is in perfect working order. We believe the works to be either Swiss or German.


The following are the appraisers comments:


The age of your lovely French Louis XV style clock is easily determined by two factors: The hands are typical machine cut hands of the late Victorian era circa 1900.  In addition the movement which bears the mark WU and a serial number is machine made with a damascene decoration of the back plate.  The rectilinear back plate and appearance of the movement suggest either German or Swiss manufacture.  The Germans had  a multitude of clock factories after 1890 and supplied movements to France, England and America where they would be cased, at a low cost.  They imitated all the styles of these countries and frequently supplied a case made in Germany. Most of the German movements were unsigned.


Your clock is a classic and handsome example of Louis XV style with an ornate urn surmounting a metal dial with individual porcelain or plastic numerals separated by metal.  These were commonly  found on  mid eighteenth century clocks.  The dial is surrounded by metal vines and leaves.  A fancy double shell sits beneath the dial. The base consists of rococo C-scrolls and on feet typical of those found in Louis XV clocks.  The overall design is quite pleasing.   The period of Louis the Fifteenth runs from 1723-1774. The straight line of the previous era is replaced by the rococo or ornate curve, characterized by flowing scrolls and fantastic ornaments.  The movements were generally round, complicated and made by expert craftsmen, whose name or mark were placed on the movement.


Over the years of the nineteenth century and early twentieth century the style of Louis XV was copied.  During most of the 19th century the movements were still French made, and marked as such, by firms such as Japy Freres or LeRoy, etc. These continued to be simplified round movements usually with silk thread suspensions.  By the 1890's the Germans were actively competing in the clock market in America, England and on the Continent.