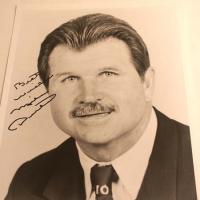 We guarantee the authenticity of our autographs or double your purchase price is refunded.  Please see or many other sports autographs by clicking on the home page below and selecting your favorite sport.

Michael Keller Ditka, Jr. (born October 18, 1939, in Carnegie, Pennsylvania) also known as Iron Mike Ditka or Da Coach, is a former American NFL player, television commentator, and coach. Ditka coached the Chicago Bears for 11 years. He and Tom Flores are the only persons to have won a Super Bowl as a player, assistant coach, and head coach; and was the only individual to participate in two Chicago Bears� conference championships, as a player in 1963 and as head coach in 1985.
Ditka played for the University of Pittsburgh from 1958-1960. He started all 3 seasons and is widely considered one of the best tight ends in college football history. In addition to playing tight end, he also served as the team�s punter. He led the team in receiving in all 3 of his seasons with them and was a first team selection on the College Football All-America Team in his senior year. Ditka was drafted to play tight end by the Bears. His presence was immediately felt. In his first season, Ditka had 56 receptions, introducing a new dimension to a tight end position that had previously been dedicated to blocking. His success earned him Rookie of the Year honors. He continued to play for the Bears for the next five years, earning a Pro Bowl trip each season. He played on the 1963 NFL championship team. Many of the players from that team, including Ditka, were drafted by assistant coach George Allen, a future Hall of Famer, who was then in charge of the Bears drafts. Ditka was traded to the Philadelphia Eagles in 1967, where he spent two seasons, before being shipped off to the Dallas Cowboys in 1969. He spent four seasons with the Cowboys, highlighted by a touchdown reception in the Cowboys� 24-3 victory over the Miami Dolphins in Super Bowl VI.
In 1988[1], his fearsome blocking and 427 career receptions for 5,812 yards and 43 touchdowns earned him the honor of being the first tight-end ever inducted into the Pro Football Hall of Fame. Ditka also scored 2 touchdowns on offensive fumble recoveries, tying 7 other players for the most in NFL history. In 1999, he was ranked number 90 on The Sporting News� list of the 100 Greatest Football Players.
Retiring after the 1972 season, Ditka was immediately hired as an assistant coach by Cowboys� head coach Tom Landry. Ditka spent nine seasons as an assistant coach with the Cowboys. During his tenure, the Cowboys made the playoffs eight times, won six division titles and three NFC Championships, including the one preceding their Super Bowl victory in 1977.
In 1982, Chicago Bears founder George Halas personally sought out Ditka to take over the head coaching reins, and reverse what had been a mostly dreary performance by the team in the years since Halas retired as head coach. Reversing the Bears� pitiful record of only two winning seasons in the previous nineteen, Ditka led the Bears to six NFC Central titles and three trips to the NFC Championship. Ditka�s coaching career hit its pinnacle in January 1986 with a 46-10 trouncing of the New England Patriots in Super Bowl XX. Football commentators widely regard the 1985 Bears defense as one of the best ever, which was masterminded by defensive coordinator, Buddy Ryan, with little oversight from Ditka. In an unusual gesture, following the Bears Super Bowl victory, Ryan was carried off the field by team members as well as Ditka.