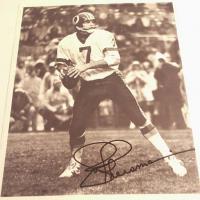 This autograph in the 8" x 10" photo was personally obtained by Robert Towne, along with other autographed photo's we have obtained from his son.


This is a black and white, a little grainy and has a slight crease near the left arm.


Joseph Robert Theismann (born September 9, 1949   in New Brunswick New Brunswick, New Jersey,) is a former American football quarterback and curent television announcer for ESP.    He played football for theUniversity of Notre Dame and was a runner-up for the 1970 Heisman Trophy which went to Jim Plunket of Stanford University.


Theismann was selected in the fourth round by the Miami Dolphins in the1971 NFL Draft, as well as Major Leaque Baseball's Minnesota Twins in that years's Major Leaque Baseball draft.  However, instead of playing for the Dolphins or the Twins, Theismann elected to sign with the Toronto Argonauts of the CFL. In his rookie year, Theismann led the Argonauts to a 10-4 record and won the league's eastern conference passing title and a berth in the Grey Cup championship game in Vancouver, British Columbia versus the Calgary Stampeders.


In 1974, the NFL Washington Redskins obtained his rights, and Theismann, determined to make it to the NFL, left the CFL and joined the Redskins where he volunteered to be the team's punt returner.  In 1978,  Joe Theismann became the Redskins' starting quarterback after Billy Kilmer  proved ineffective.


Theismann led the Redskins to a win in Super Bowl XVII and an appearance in Super Bowl XVIII and would go on to set several Redskins franchise records, including most career passing attempts (3,602), most career passing completions (2,044) and most career passing yards (25,206), while also throwing 160 touchdown passes, with 138 interceptions. On the ground, he rushed for 1,815 yards and 17 touchdowns. He was the NFL's MVP in 1983 and played in two Pro Bowl games, earning the player of the game award in the second game.  Joe's great career ended with a broken leg in a Monday Football game.


We guarantee this autograph to be authentic or double your purchase price back.


Please see our other sports autographs by clicking on our home page below and selecting the sport of your choice.